My Queen Bee look consists of:

A 1950s Handmacher skirt, “Queen Bee” top from 1683 Atelier, a contemporary brand that goes perfectly with all my 1930s-1950s garments, a late 1940s purse, a 1950s style Pillbox hat and the French Sole Hefner slippers with Queen Bee embroidery that I believe even Joan Crawford would approve of!

Detail of The Queen Bee top by 1683 Atelier

How to wear 1950s clothing in Autumn

Partaking in my pleasure for being a dissolute designer of lists, if I was to name only five of my favourite movie stars of the 1930s and 1940s, it would have to be without doubt or hesitation; Bette Davis, Katharine Hepburn, Rita Hayworth, Marlene Dietrich and of course the Queen Bee herself, Joan Crawford who I’ve taken ample inspiration from for my latest look which should not be confused with me trying to be a copycat but rather seen as an Ode to an actresses who I’ve been fascinated with since the age of seven.

The queen of the silver screen once famously said “I never go outside unless I look like Joan Crawford the movie star. If you want to see the girl next door, go next door.” Always glamorous, known on and off the movie set for being a true perfectionist, with a distinctive style adorned and copied by fans all over the world. How powerful her influence on the public really was we learn from the August edition of Click magazine printed in 1938 “The greatest fashion influence in America, stylists now sadly admit, is the much-glamourized, much-imitated movie queen. What she wears is news, eagerly copied by girls all over country who want to look like Crawford or Loy. The most widely imitated star, Joan Crawford, started more girls wearing kerchiefs for hats.” Which almost ruined the $250,000,000 millinery business.

How to Wear the Little Black Dress!

Vintage inspired slacks and how to wear them!

How to style saddle shoes!

Old Hollywood Glamour "Fashion is a language. Some know it, some learn it, some never will - like an instinct." Edith Head View post 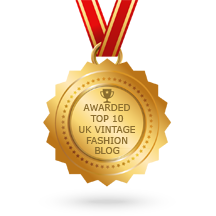